Showing posts from January, 2021
Show all

January 28, 2021
In a thin culture, an object simply is what it is.  What you see is what you get. As a culture gets thicker, often objects are more than simply objects.   Objects become signifiers, with meaning.  They have an entire range of associations, implications, resonances, rhymes, stories, powers, taboos, rules.  One doesn't use them in certain ways - only certain people, at certain times, under special circumstances, after performing the correct rituals and genuflections.  A thick culture is one of profound obligations, more than can be contained by the rational mind. It's probably inevitable that America is thickening.  There's probably nothing that can be done to stop it.  Besides, it's probably a good thing.  It's probably better to be a thicker culture.  But there is a trade-off.  You gain something (can you call it wisdom?) but you lose something (can you call it clarity?).
Post a Comment
Read more

Back on my aesthetic materialist bullshit

January 26, 2021
Not long ago, Colin Drumm asked "What is the difference between idealism and materialism?" Here's my brief reply, slightly edited: They are two aesthetics, or two families of aesthetics. Which you prefer is a matter of taste.  People who prefer idealism prefer unities, isomorphisms, structures that are reducible to simple elements. The ideal of idealism is an everything that is reducible to nothing.   Materialists prefer it when something about what they see is not reducible to a pattern - when something doesn't fit, and eludes our ability to see it as an iteration of a larger whole, our ability to comprehend it, understand it, or sometimes even describe it.  This doesn't necessarily imply structurelessness; it may imply novel structure.
Post a Comment
Read more 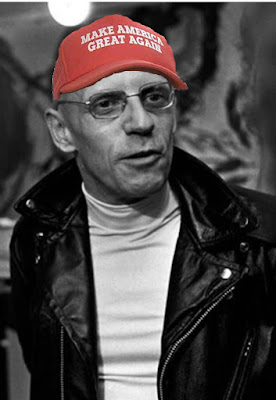 Foucault was fascinated in history's bad boys.  He was attentive to the ways in which bourgeois society disciplines people by categorizing and classifying them, to how this process is formative of ethics and subjectivity, and to how this takes place in specific spaces: the prison, the mental health facility, the courtroom, the clinic, the army barracks, and so on.  Remaining aloof from moral judgment, he was particularly focused on "the body of the accused"/"the body of the condemned," which he examined and interpreted with a loving attention to detail that bordered on romanticism.   In his works we come across many delightfully roguish characters: for instance, there's Jouy, the "half wit" farm hand from 1867 in Lapcourt, whose story Foucault relates in The History of Sexuality, Volume 1 .  Nowadays, we would classify Jouy as a pedophile.  Foucault refrains from using such a term, but he acknowledges that Jouy had "obtained a few caresses
Post a Comment
Read more
More posts