Showing posts from June, 2019
Show all

Voldemort and Harry meet at the Piraeus 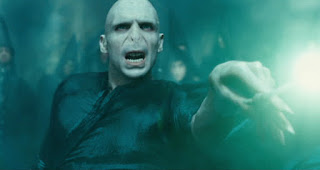 [originally posted to facebook, June 22, 2016] Voldemort: Join me, Harry! There is no good and evil. There is only power, and those too weak to seek it. Will you join me? Harry: Before I answer, tell me this: what is power? Voldemort: The ability to do whatever you want, and to have whatever you want happen. If you become a Death Eater, there will be no limits to the magic you can perform. Do What Thou Wilt shall be the whole of the law. Harry: But if I join you, I'd have to do what you say. Voldemort: Of course. I am the leader of the Death Eaters. Harry: So I would actually be losing power, if I joined you. Voldemort: Technically. Harry: Tell me about honesty and dishonesty. Voldemort: Mere illusions! This binary opposition derives from the fundamental illusion, which is morality itself! Harry: Illusions, eh?  So you mean that saying that morality does exist is... dishonest? Voldemort: I see what you did there. Harry: If there are no rules ab
Post a Comment
Read more

Did I write this story?

June 21, 2019
[originally posted to facebook, March 24, 2019] Okay weird request: I remember a short story, and I remember thinking this is my favorite short story. I think I read it as a kid (maybe in a textbook?), but I don't remember the title or author. I did some googling and couldn't find it. So my friend Ryder said, "Just write it." So I did. Is this familiar to anyone? He was in danger of missing his appointment, which was on the 23rd floor, and now he realized that he would have to take the stairs. Cursing silently, under his breath, he checked his watch and looked up at the gray concrete steps, the yellow tiles on the walls, the metal railings. Then he slowly inhaled, puffed it out quickly, and started running up. Even though he knew he was going to be late, it wasn’t long before his run slowed to a trot, and then to a walk. “Why don’t I go to the gym more often?” he thought, “I’m paying for it.” Then he tried to be a bit more optimistic.
Post a Comment
Read more

Is there anything sadder than Beto O'Rourke?  The Democratic party is desperately trying to win over young voters through him, touting his credentials: he skateboards.  He was in a band with Cedric Bixler-Zavala who later went on to form the famous post-punk group At the Drive-In and, later, The Mars Volta- and he played bass wearing a dress, with long hair and a goatee.  He touts something called "Fugazi politics".  As a teenager, he was in the early hacker collective, The Cult of the Dead Cow, where his hacker name was "Psychedelic Warlord" and he wrote about achieving a "money-less society" and that "this is where the anti-money group and the disciples of Anarchy meet".  He also wrote a short story about a mass murderer that runs over chidren.  He was a "cyber-hacktivist" that started a digital bulletin board called TacoLand that was influenced by the zine, Maximum Rock'n'Roll.  He's a gamer.  His rea
1 comment
Read more

June 17, 2019
[originally posted on facebook, June 17, 2016] Cosmology number 357: God exists. Or, rather, gods exist. Or, more precisely, myriad uncountable divine, god-like beings exist, or at least beings that are god-like in comparison to us. There are beings whose consciousness surpasses ours more than our own finite minds surpass those of bacteria. And then there are beings that are like Gods compared with them , and then levels of gods orders of magnitude higher than them, and so on and so on, perhaps infinitely. Even the lowes t rungs of this hierarchy of consciousness above ourselves we could no more understand than a dog could learn calculus. And not only are these beings incomprehensibly more powerful than us, and smarter, and more knowledgeable, and wiser, but they are also vastly, unimaginably more moral than us. They are truly better than us, infinitely more kind and courageous and loving, and they understand what the word "good" means, in depths and heights tha
Post a Comment
Read more
More posts