Showing posts from April, 2021
Show all

The Ex - History is What's Happening (one of the greatest musical recordings of all time) No matter when or where you're reading this, even if it's ten thousand years after I wrote it, or more: The most important history to study and understand is the history that's happening right now.  Whatever's happening right now, when you're reading this, in your world, in your galaxy.  Call that Group A. But you can't really understand the history of Group A, unless you understand its context.  The next most important history to understand is the history that you need to understand in order to understand Group A.  Call that Group B.  Quite likely, this is the history that happened immediately before Group A, but not necessarily.  It's quite possible that you're living at a time when laws that are hundreds of years old are still in effect, when governments that are hundreds of years old still exist.  Or other social forms, social customs, social hierarchies t
Post a Comment
Read more

The Spectacle of Abstention 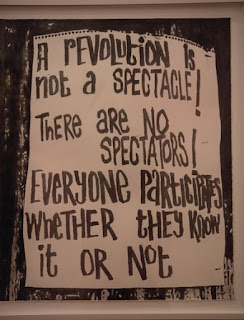 “The revolution is not a spectacle!  There are no spectators!  Everyone participates whether they know it or not.” So read an anonymously copied sign, distributed in California, in 1968.  It's been often attributed to the Weather Underground but I doubt they wrote it.  (If anyone has solid information on the origin of this sign, let me know.) Anyway, whoever wrote this, they almost got it right.   The better way to put this is: abstention must be understood as a mode of participation in the spectacle. Yes, there are times when "The only winning move is not to play."  But to imagine that this is always true is to succumb to the same kind of dogmatic ideological idealism that abstentionists proudly claim to avoid.  There is no a priori schematic set of principles that can tell whether or not to abstain in any particular form of activity; it must be considered in relation to precise historical and material conditions.  Beware of claims that any particular cond
Post a Comment
Read more

April 09, 2021
I write, primarily, to clarify ideas in my own mind.  If other people want to read them, that's fine.   I appreciate it, and I'm grateful if people want to engage critically with these ideas and challenge them.  But ultimately, these writings are not written for other people.  They're written for me.   I write because I'm so forgetful .   If I have an idea, I want to jot it down, or else it will be lost forever - amazingly quickly. I want to have these thoughts in front of me, so that I can compare them, and see whether one idea that I've had makes sense with another idea that I've had.  If it doesn't, that's not the end of the world.  I don't mind being a little inconsistent.   In fact, that can be exciting, for me.  I'm always playing prosecutor against myself.   PROSECUTOR: "If the witness will observe Exhibit A, dated 4-9-21, on this document, you claim that snurgs are blarg.  Yet on this previous document, Exhibit B, dated 8 months
Post a Comment
Read more

April 09, 2021
One of the problems with the whole "good guys vs. bad guys" thing is that it's mostly the wicked things that make life worth living. Philosophy is a wicked thing.  A philosopher questions, and a question is already a kind of rebellion.  Moral philosophy is a bit of an oxymoron: a philosopher questions the mores of her society, and to do so means, at least at some small, abstract level, to stand outside of these mores. True, many would-be philosophers lack the boldness to be logically rigorous, and to take their questions to the end, hiding behind moral scruples.  And then they wonder why they cannot figure out the meaning of life.  No wonder: for the goody two-shoes, life has no meaning. Aesthetics are all a little wicked.  Art cannot be amoral - art should be immoral. Laughter is a little bit wicked - or at least, the best humor is wicked.  Laughter and horror- these two are intertwined in strange ways, that are not fully captured in the simple word "surprise,&q
Post a Comment
Read more
April 01, 2021
The lesson we can all learn from the example of Jordan Peterson is: sure, a social hierarchy of respect, honor, and esteem exists.  But simply directly striving to get to the top of the hierarchy, without any consideration for the consequences of your actions, won't get you there.  Instead, it will make people hate you.   Peterson has been touting his "big five" personality tests, for years, with one of the vectors being "agreeableness," and at the same time he has been railing against "agreeableness," arguing that too many people in society are too agreeable.  Peterson committed himself with reckless abandon to his daughter's all-meat diet, against all medical advice (presumably because accepting such advice would be too agreeable), with the delusional belief that an all-meat diet would transform a normal person into an unstoppable Alpha Male.  Soon after this, Peterson succumbed to a severe autoimmune reaction to his own food, combined with extre
Post a Comment
Read more
More posts