The Snap of Thanos 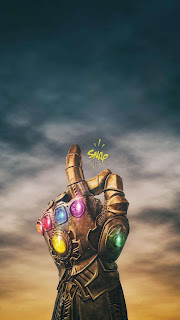 If you managed to avoid watching the "Avengers: Infinity War" movies, first of all, good job.  They're about a big purple Grimace-looking guy named Thanos, who gradually acquires enough magical powers to be able to wipe out exactly one half of all life in the universe, with a snap of his fingers.  Why?  Apparently in the comic books, it's because he's in love with death, which sounds a lot cooler, and appropriate for his name, which sounds a lot like Thanatos, Freud's theory of the death drive.  In the movies, it's because of some cockamamie plot device about him caring about living things wasting our natural resources, or something. This caused more than one pundit to compare Thanos to an environmentalist.  (Where oh where are the superheroes that will save us from these terrifying, extremely powerful environmentalists?)

Have you heard about the Fermi Paradox?  It's not really a paradox.  It's just a puzzling fact, which we don't know how to explain: no one can find any life anywhere in the universe, besides the Earth.  Given the vast number of stars we can see, we should have seen someone by now, or at least some sign that someone once existed.  Where is everybody?  Are we really all alone?  It's looking like this may be the only planet with intelligent life in this galaxy.  As much as a "waste of space" as it may be, we have to consider the possibility that it really is true: there is no life anywhere else in the entire universe.  All of the life is here on Earth.

And, um, some bad news about that: according to the Guardian, humanity has wiped out 60% of animal populations since 1970.  Immediately corrections were issued, like this one, from the Atlantic, which tells us not to worry: the report the Guardian quoted only said that an average of 60% of animal populations have been wiped out - for some populations, it may be more like 80% or 90%.  How reassuring.  And the report only referred to vertebrate populations.  Invertebrates are fine, right?  Uh oh.  (And that's a big uh oh... without insects to act as pollinators, flowering plants are in major trouble.  And without plants....)

However you want to spin it, we are living through - we are causing - a mass extinction event of mindcrushing proportions.  Much of this has only occurred in the last couple thousand years - which, in evolutionary terms, is a snap of the fingers.  (As the Guardian piece states, much of this is just since 1970!)

Let's face it: We are Thanos.

We, human beings, are quite possibly wiping out more than half of all life in the universe.

That's right, haha!  You thought you were going to read about the Marvel Cinematic Universe, but I tricked you into reading an environmentalist essay!

Is this the end of the world?

Sure, I would like universal healthcare.  But dealing with global mass extinction, of course, must take precedence over universal healthcare.  I’m sorry to say that global mass extinction is a more important focus of our energies than the plight of the prisoners at Guantanamo Bay, or the frequency of often lethal police brutality.  This is not to say that we cannot work on these important causes.  We can, and we should.  But global mass extinction has to take precedence.  Beside it, all other issues vanish to irrelevance.  So if one candidate offers "medicare for all", and another candidate offers "medicare for those who want it", I REALLY DON'T CARE AT ALL.  I'm sorry if that sounds callous to the suffering of people who cannot afford proper health care, but worrying about anything else when the world is dying sounds callous to me.

So, yes, I confess: I am a "one-issue" voter. The environment is the only issue I care about.

It's certainly not a single issue.  There are, of course, many different issues, many of which run into conflict with each other.  We all know this from the "paper vs. plastic" debate: plastic isn't biodegradable, and thus fills our landfills; paper kills trees.  Or the standard incandescent lightbulbs vs. compact fluorescents (CFLs) debate: CFLs are more energy-efficient, and last longer, but they also contain mercury, which is poison for most living things, and can thus be considered a pretty nasty pollutant.  On the one hand, there's the energy crisis - we are facing, or may have already passed "Peak Oil," which means that oil and other fossil fuels are going to get more scarce, and that means less energy to power our hospitals, the massive pumps that keep the foundations of cities like New York from flooding, and so on.... On the other hand, these same fossil fuels release greenhouse gases like CO2 into the atmosphere after combustion.  So we have many decisions to make, and no options that don't come with some kind of cost.

And with apology to the Abbe Sieyes, I want to add: What will it be?  Nothing.

Or, with apology to Vince Lombardi, or Red Sanders, or whoever, I want to say: the environment isn't the only thing, it's everything.

For too long, right wingers have positioned themselves as the adults, because they are (supposedly) fiscally responsible.  But fiscal responsibility is childish shortsightedness - the only way to be a real adult is ecological responsibility.  Because we are now facing the mass extinction of life on Earth.  And when you're facing that, it's the only issue that matters.  (Imagine if aliens arrived on Earth and started killing everything with death rays - and we immediately got to work arguing over who can use which public restrooms.)

Because this is not something that's possibly happening in the future.  This is already a mass-extinction event, and first of all we should be clear about that.  It’s here, and it’s been here for a long time.  And it’s expanding, very very rapidly.  We should do everything we can to avoid allowing this mass-extinction event from expanding even further, and potentially wiping out a large part of the human population.

We need to stop imagining that we can return to a state of perpetual balance, a "Mother Earth" which  cares about us and will protect us.  This universe, governed by the second law of thermodynamics, is at best indifferent to life and at worst quite hostile to it.  It's amazing that we've survived this long, and there is absolutely no reason to think we will survive any longer, and every reason to see why we won't.

I'll put my cards on the table. The only suitable government in the 21st century is the government most fit for avoiding global mass extinction.  If we could avert global mass extinction, either by establishing a brutal Stalinoid autocracy over the world, or by eliminating government as we know it and bringing on an era of “anarcho-capitalism,” then: even though both of those alternatives sound completely nightmarish to me, I would recommend either of them in a heartbeat.  Tyranny now!  Of course, neither one is actually a good strategy for reversing the process of the global mass extinction that we are in, so it’s a moot point.  Nonetheless, any rational person would do anything it takes to avoid global mass extinction, because the alternative, no matter how awful, is probably better than that.  (Is there anything so bad that wiping out all life in the universe is preferable to that?  Maybe, although it’s hard to imagine.)

The reason for this calculus is obvious: however bad the worst regime imaginable could be, it’s at least plausibly possible that it might somehow one day end, or at least be partially ameliorated.  But the extinction of all life in the universe is forever.  There’s no coming back.  And forever is a very, very long time.  Anything that one does that affects everything forever has to count for more than whatever suffering one must endure for some finite period of time.  Literally everything else can wait.